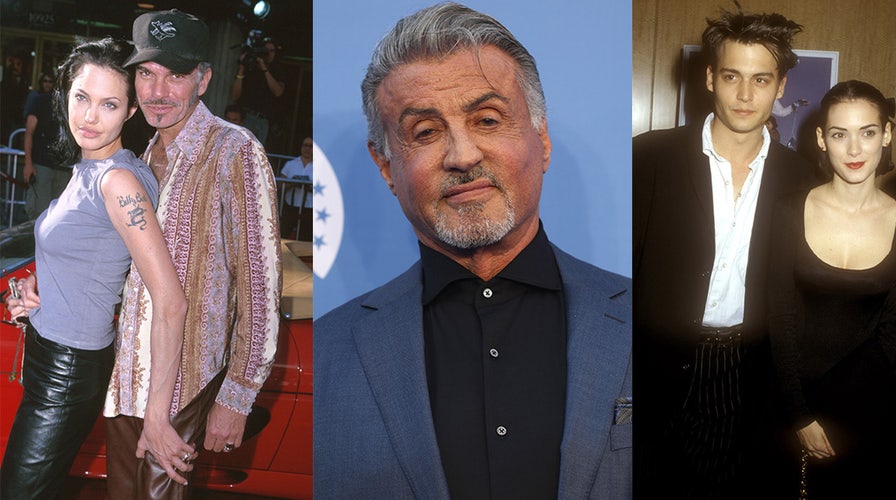 Forgetting their exes: it looks like some ink and relationships may not last forever.

Four days after Sylvester Stallone’s wife Jennifer Flavin filed for divorce, the "Rocky" star covered up a large tattoo – a tribute to his partner – with an illustration of his bullmastiff, Butkus. Meanwhile, after Angelina Jolie and Billy Bob Thornton split in 2002, the actress removed his name from her upper left arm, but kept the dragon that was beneath it.

Here is a look at some Hollywood stars who have covered up their tattoos following a breakup. 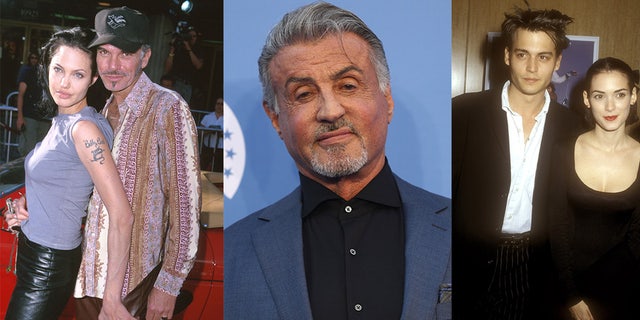 Sylvester Stallone is the most recent A-list celebrity to cover up a tattoo dedicated to an ex. Stallone’s wife, Jennifer Flavin, filed for divorce in Palm Beach County, Florida, on Aug. 19 after 25 years of marriage.

Four days later, it was revealed that the "Rocky" star, 76, had covered the large image of Flavin’s face on his bicep with an illustration of his bullmastiff, Butkus. His late pet starred alongside him in the iconic "Rocky" film.

The news of Stallone's new ink surfaced before his and Flavin's divorce made headlines, and a publicist for Stallone told the Daily Mail that the tattoo coverup did not pertain to marital issues. Stallone "intended to refresh the tattoo image of his wife Jennifer however the results were unsatisfactory and, unfortunately, unfixable," his publicist told the outlet. 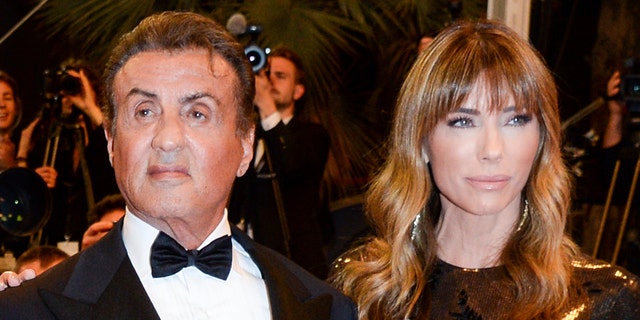 Sylvester Stallone covered up a tattoo of his wife Jennifer Flavin after she filed for divorce. (Marc Piasecki)

In a statement to Fox News Digital, Stallone addressed the divorce news. "I love my family. We are amicably and privately addressing these personal issues," the statement read.

Angelina Jolie famously removed Billy Bob Thornton’s name from her left arm following their split in 2002. The tattoo design featured a dragon below his name, which the actress originally decided to keep. Later, she changed the tattoo on her upper left arm completely.

The pair first met in 1999 on the set of "Pushing Tin" and married the following year. In 2003, the couple separated. 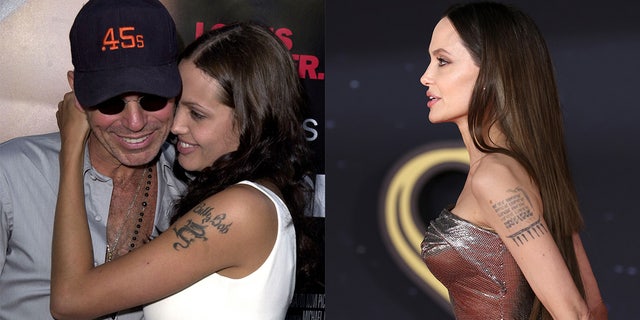 At the time, Thornton and Jolie were among the most famous Hollywood couples that put their PDA front and center. During the red carpet premiere of "Gone in 60 Seconds," the couple could not keep their hands off each other.

They shocked the world when they debuted necklaces that contained a vial of blood from one another. During the HFPA in Conversation podcast episode that aired in 2018, Thornton addressed the blood necklaces.

"The necklaces were a very simple thing, ‘Hey let’s poke our fingers with a pen and smear a little blood on there and when we’re away from each other we’ll wear the necklace,’" he shared. "It was that easy. But by the time it came out in the press it sounded like we were wearing a bucket of blood around our necks."

Pete Davidson has dedicated several tattoos to past flames. When he was in a relationship with Ariana Grande, the "Saturday Night Live" star got her "Dangerous Woman" album cover tattooed behind his ear. 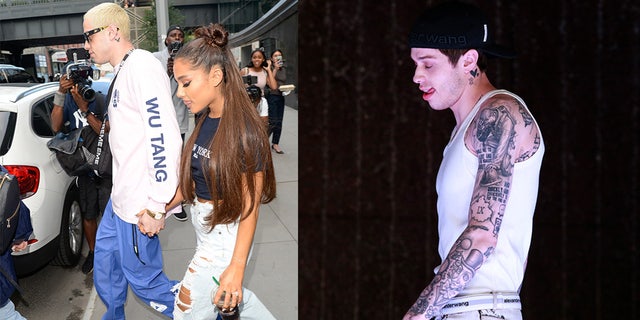 Pete Davidson turned an Ariana Grande-inspired tattoo behind his ear into a heart following their split. (Getty Images)

Following their split, he reshaped the tribute to Grande into a heart. In his most recent relationship with Kim Kardashian, the comedian showed his love to the SKIMS founder in a more dramatic way.

PETE DAVIDSON'S TATTOO TRIBUTES TO KIM KARDASHIAN: ALL HIS INK FOR THE REALITY STAR 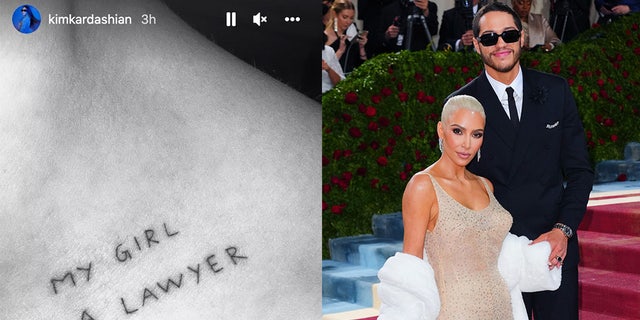 Pete Davidson got several tattoos on his body in honor of his ex-girlfriend Kim Kardashian. (Kim Kardashian Instagram/Getty Images)

Davidson got Kardashian’s first name branded onto his chest. He also showed support to the reality star’s law career by getting "my girl is a lawyer" tattooed on him. The couple split after nine months of dating in August, and it’s unclear if Davidson will cover up his art dedicated to Kardashian.

One of Johnny Depp’s most talked about relationships was with his fellow "Scissorhands" co-star Winona Ryder. The couple dated in 1989 and after five months, the pair became engaged. Depp and Ryder split in 1993.

During their relationship, the "Pirates of the Caribbean" star had the words "Winona Forever" tattooed on his upper right arm. Following their split, Depp infamously had the tattoo altered to read "Wino Forever."

In a 1993 interview with Australia Tonight’s Steve Vizard, before he altered his "Winona Forever" tattoo, Depp shared that the tattoos he has on his body are "a journal." 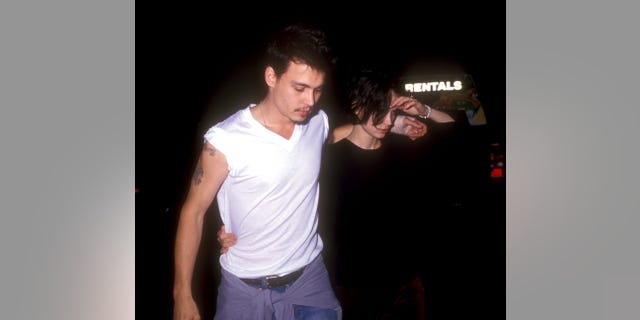 "These tattoos for me are a journal," he said at the time. "As opposed to writing it on a piece of paper, I took the initiative and put it on skin. So I wear my journal."

Depp continued: "Even though we’re not together anymore, it doesn’t take away the honesty of the moment of when I got the tattoo… I don’t regret the tattoo at all, in fact it’s a part of my past, it’s part of my history, and I would definitely keep it. I mean I could add things to it, I could subtract, I could make it ‘wino forever,’ for instance. You never know."

Melanie Griffith made a bold statement when she removed the name of her husband of 20 years, Antonio Banderas, from inside a heart she had tattooed on her arm just a few weeks after announcing their divorce. 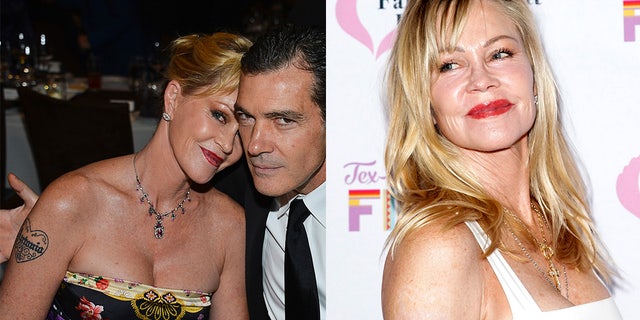 In 2014, Griffith was seen at Italy’s Taormina Film Festival with Banderas’ name missing from her arm. The star covered his name with make-up during the red-carpet appearance, and went on to have it lasered off. She famously debuted the tribute to her then-husband in 1998.

In 2008, Heidi Klum honored her then-husband, Seal, with a tattoo of his name on her right forearm to celebrate their fourth wedding anniversary. The couple wed in 2005 and their split in 2012 sparked Klum’s decision to have the ink removed. 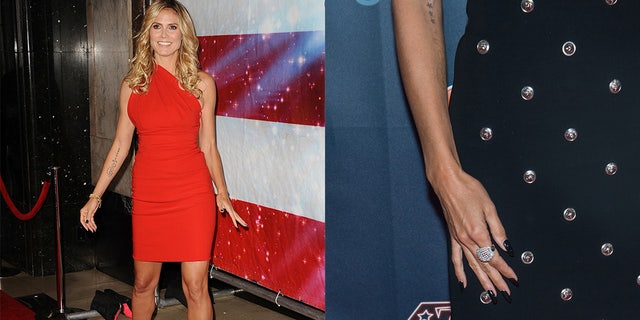 Heidi Klum removed Seal's name from her arm, but kept the three stars with her children's initials. (Getty Images)

The tattoo, which featured Seal’s name on her forearm connected to three stars with her children's initials, now only has her kids' names. The couple share: Henry, 16, Johan, 15 and Lou, 12. Klum shares her oldest daughter, Leni, 18 with Flavio Briatore.

Eva Longoria married Tony Parker in 2007. During their relationship, the "Desperate Housewives" actress had three tattoos penned on her body in tribute to her husband. The couple split in 2011 and Longoria decided to remove all evidence of Parker from her body. 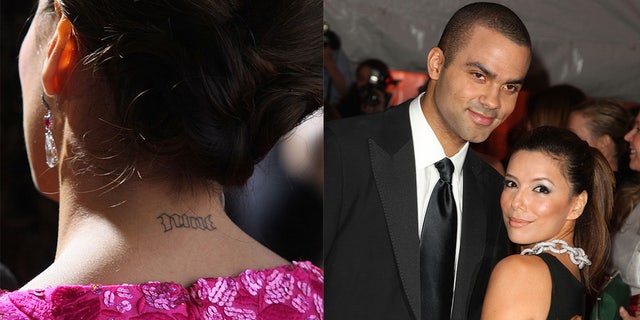 Longoria reportedly had the number "nine" removed from the back of her neck, their wedding initials on her wrist and Parker's initials "on a very private, undisclosed location" in 2012. Parker was a professional basketball player in the United States at the time of their relationship. 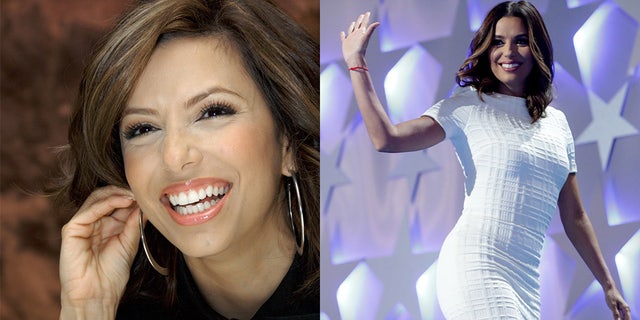 Eva Longoria also removed a tattoo from her wrist, which was reportedly the couple's wedding anniversary. (Getty Images)

In 2016, Longoria made another trip to get the rest of the tattoos on her body removed. At the time, she documented the entire process on Snapchat. "This is a tale for all young kids," she said in a video . "It hurts to get a tattoo, but it's 10 times worse getting it off!"

Janelle Ash is an entertainment writer for Fox News Digital.