The alleged "cop killer" former Marine who fatally shot a Florida deputy during a traffic stop was apprehended by authorities Tuesday, concluding a five-day manhunt that sent schools into lockdown.

Law enforcement located 35-year-old Patrick McDowell in a ballpark in Callahan, Florida, on Monday in an area near a concession stand and a bathroom, Nassau County Sheriff Bill Leeper said at a press conference. SWAT teams gave him several commands to get on the ground and "crawl like a baby, like the coward he is," Leeper said. Law enforcement released one of their dogs, which grabbed McDowell by an arm, and officers placed him in handcuffs belonging to Nassau County Deputy Josh Moyers.

"I wish he would have given us an opportunity to shoot him. But he didn’t," Leeper said. "He crawled out like a coward. He’s in custody. And he’s going to pay for what he did."

Moyers, 29, died at 2:19 p.m. Sunday at UF Health Jacksonville. McDowell allegedly shot the deputy several times during a traffic stop in Callahan on Friday, and law enforcement quickly set up a perimeter of a five-mile area covering about 3,000 acres, Leeper said. Deputies had gone door to door checking on residents over the weekend, and several schools in the area were on modified lockdown Monday.

When McDowell crawled out of the ballpark Tuesday, surrendering, he had T-shirts tied around gunshot wounds he received from law enforcement several nights ago when search teams encountered him in the woods, Leeper said. The sheriff explained how a police canine bit McDowell while he was bedded down in a wooded area, so he shot the animal and law enforcement returned fire. 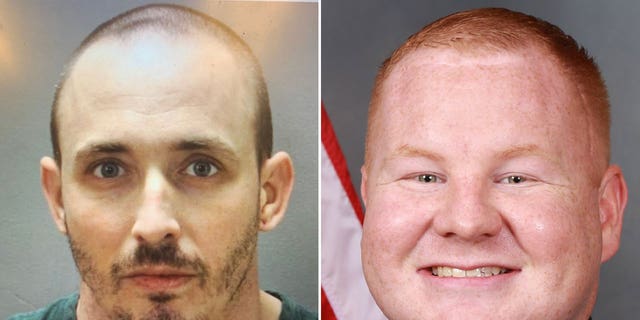 "He got struck in the right thigh and grazed the top of his head. He was injured with a bad wound," Leeper said, adding that his office was in the process of making additional arrests for individuals who assisted McDowell while he was a wanted fugitive. "He was trying to reach out to people who could get him help. He knew if he went to the hospital we would find him."

In a statement obtained by WJAX-TV Monday, McDowell’s father, Richard, offered condolences to Moyers’ family and explained that his son was diagnosed with PTSD and became addicted to drugs after serving in the Marines.

"I want to explain a few things about Patrick but please don’t think I’m making excuses for him or trying to rationalize his actions. After Patrick returned from Iraq he enrolled and sought help from the VA for depression, headaches and nightmares," the statement says. "He was diagnosed with PTSD and depression and some physical infirmities. At first, he was motivated to deal with his demons and started a family."

"As time progressed, he slipped into a darker place. He had trouble with seizures, pain management and sleep patterns. He turned to drugs and quit going to his VA appointments. He started stealing to support his habit and was arrested," McDowell's father continued. "He was accepted into Veterans Treatment Court and was doing very well."